I was never into politics, but elections are something everyone should be aware of, especially for a marketer or a PR person. Marketing and politics go hand in hand, when the main purpose of this battle for power is to sell an image. And when you’ve done that at a good price, you can cross off your list another successful political marketing campaign.

Marketing wise, Romanian political campaigns are criminal, literally. And most of them set out an example of “How not to…”, developing a list of “Don’ts”. Though many have probably gone the extra mile to gain the empathy of their fellow citizens creating a story around their own selves, the majority of campaigns express shocking negative self-images or represent an incriminatory approach to the opponents’ actions. 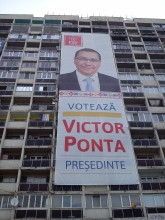 “Proud to be Romanian” is the key message of Victor Ponta‘s campaign. And he states that through all the visuals and headlines of his campaign. Immense billboards with his profile picture and traditional Romanian motives shout nationality. From the size of it you can only imagine the financial investment. He’s built an image of a people’s person, proud to see the success of his country in the economy, the internationalism, the European link, the icons, that should make every Romanian proud of his country. What’s to criticize here? Nothing, except for the attacks to his next-in-line opponent, his live media appearances being probably the only moments when he’s left out without a counselor, a guide to dictate it’s every movement.

Sliding to the next candidate, wouldn’t even know how to begin. His strategy campaign looks in the past, condemning almost every act of his predecessors. While the first one praises Romania and its results so far, Klaus Iohannis seems to debunk everything from the law to the workforce itself. “Romania, a well done job”, the campaign slogan, should position the candidate as a man of facts, rather than empty words. His scolding attitude, with its finger pointing pose is looking down at the competition, reclaiming the long lost statut of his country. He might actually be right, but who’s to say that?

Well, irrespective of the long list of candidates, the most suitable one for Romania is, by far, Elena Udrea. She is Good! “Good for Romania. Good for modernization.” And, if marketing is said to sell, for sure she’s got the best campaign manager who can turn a political campaign into a sell out. Don’t know exactly what she means by “good”, as it could be interpreted in so many ways, but my first impression when I saw the layout was something like: “Hm… here’s another nice lingerie commercial!” And, to close up the list in an ironic way, here’s yet another good example on the list of marketing fails: Melescanu‘s campaign. No comments, he’s good as well. You do know you can choose the location for each and every one of your billboards, don’t you? 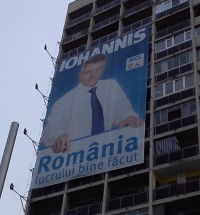 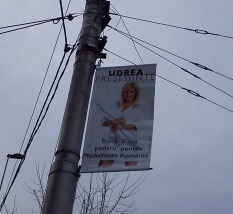 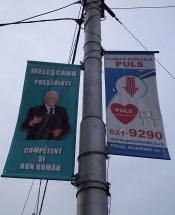 Nonetheless, for all the fails above, have some mercy. It’s not them to blame, but those who approved the concept, to begin with. In conclusion, should you ever need a “worst case practice”, I would recommend to just walk around Bucharest, and take snapshots of the political marketing campaigns. They’re criminal. They can actually give you laughter cramps.

Sharing is caring. Tell others too:

Looking for something else?

Hitchhike through my previous posts

Blogs I Hitchhike Along With

Dancing to the Words

A Journey Towards Self

Cooking with a Wallflower
The Blog of Author Tim Ferriss

Toy Photography and the History of

a journey of discovery with my camera...

Life is for Living Every Day

lifelessons - a blog by Judy Dykstra-Brown

Reflections on Life through poetry, essays and photos

"This is a brief life. But in its brevity it offers us Some splendid moments Some meaningful adventures" Rudyard Kipling

Trying to live a creative life

Midlife in New York: Living in Wonder and Writing About It

The latest news on WordPress.com and the WordPress community.

FIT IS A FEMINIST ISSUE

The History of Love

Leap Out of the Deep and Sing